I don’t know about you, but during the summer I tend to binge watch some random series on Netflix. I’m a school secretary so I usually have the months of June, July and August off and of course there is no good television on in the summer ( I love a good television show to end the evening!), so I search for some random show with multiple seasons to amuse me. It’s summer and I don’t have to set an alarm, and sometimes I work on projects around the house and I need something to keep me entertained while I do it.

At The beginning of the summer everyone was talking about season 3 of the Netflix show called Stranger Things. I hadn’t even watched season one or two, but friends were telling me it was set in the 80’s and I would like it because it was 80’s style, 80’s hair and 80’s music. Then Katie came home from college and she started watching season one (But only during the daytime, she didn’t want to watch it at night before she goes to bed because it’s too scary). So of course that intrigued me and I had to start watching it too.

I admit I do like the 80s fashions, I do like the 80s hair and I do like hearing the 80s music in this show, what I do not like is the scary monster and the stressful situations they tend to get into, so I agree with Katie that it gets scary. Par for the course in our house, Mark asked me the other day “is there a purpose to this show?” He’s a biography, documentary kind of guy, so it’s just silly to him. I’m strictly here for the entertainment, so I’m enjoying it. Although ridiculously far fetched, I’m truly enjoying the characters and the story. Two thumbs up from this critic. 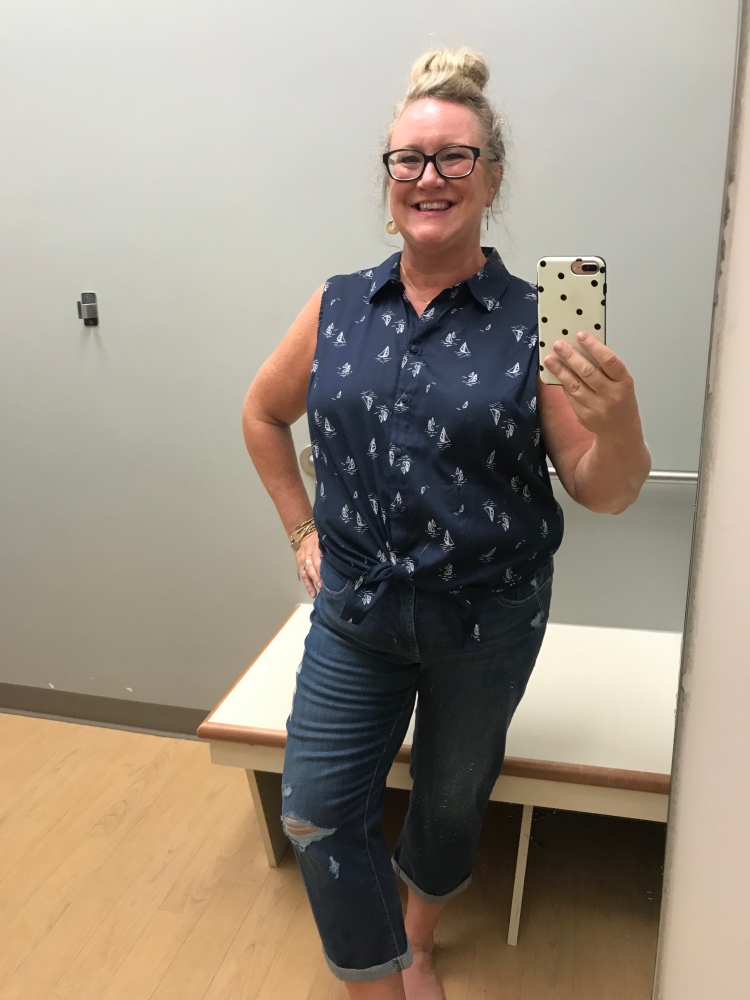 Another great outfit from a Kohl’s. I love this sleeveless top, and I usually don’t tie things at my waist because that’s my “problem area” but that look how it defines this outfit! I Love it! The cropped distressed pants are Levi’s, they actually got small, so I had to get a size larger, only in these though, everything else I’m still in the same size (whew!!!). They have a little higher waist, which I like.

Tried it with some white shorts too, can’t decide which I like more!